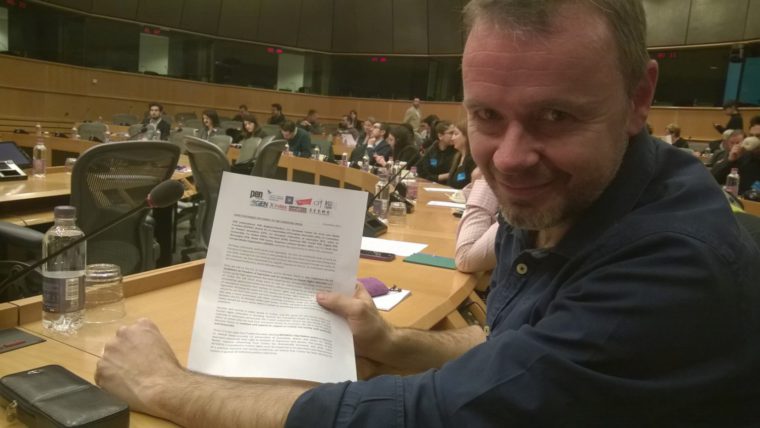 JOINT STATEMENT ON TURKEY TO THE EUROPEAN UNION

Working collectively, both jointly and separately, we have an established body of work on freedom of expression in Turkey, in part predating the attempted coup but intensifying since July 2016. Coming from the findings and concerns that have emerged through our work, on this occasion, we have developed four specific requests to the EU, its institutions including the European Parliament, and its Member States:

First, we call on the EU, its Institutions and its Member States to duly implement the EU Guidelines on Freedom of Expression and EU Guidelines on Human Rights Defenders and to live up the high expectations that were raised therein. Among other things, in the context of Turkey this will entail doing more to end the indiscriminate abuse of criminal legal proceedings against journalists and writers; calling more actively for an end to abusive state of emergency measures that impinge on human rights; and, advocating against restrictive legislation shrinking the space for civil society and human rights defenders. These concerns should be put from and centre not only in political dialogues and during high level visits, but also play a more prominent role when revisiting economic, trade and other agreements between the EU, its Member States and Turkey. Further, we believe the EU and its Member States should be more active when it comes to monitoring and condemning human rights violations.

Second, civil society is under attack in Turkey, and the space for civil society actors and human rights defenders is shrinking. Beyond the immediate impact on activists who are judicially or otherwise persecuted, the Turkish authorities’ actions are also having a chilling effect on actors who for now have remained outside its crosshairs. We call on the EU and its Member States to continue and expand its support to Turkish civil society, both politically and financially.

Third, it is our view that Turkey has been abusing INTERPOL’s Red Notice system to attempt to extend internationally its persecution of journalists, writers and others for having exercised peacefully their right to freedom of expression and opinion. The number of Red Notice requests emanating from Turkey has dramatically increased, and while under INTERPOL’s Constitution human rights must be respected in its operations and interventions of a political character are strictly prohibited, we believe that Turkey has been abusing the system in pursuit of nefarious political objectives.

Accordingly, we call on the EU and its Member States to: – Refrain from carrying out arrests on the basis of Red Notices coming from Turkey when there are serious concerns that they may be abusive; and, – Make use of their influence within INTERPOL to push for reforms of the INTERPOL system, including strengthening preventative checks before Red Notices are circulated, strengthening its appeals system, and compensating victims of abusive Red Notices.

Fourth, considering the many fair trial violations we have observed throughout our trial monitoring as well as the many other human rights violations committed by the Turkish authorities since the state of emergency was declared, the role of the European Court of Human Rights in ensuring justice for victims has become ever more important. Especially at a time when the Council of Europe’s human rights system is under pressure, emanating from actions or lack thereof by both EU and non-EU Member States. At the same time, even when duly taking into account the political and financial restraints placed onto the Council of Europe, it appears too deferential towards Turkey.

Accordingly, we call on the EU and its Member States to: – Use their influence within the Council of Europe and urge them to be less deferential towards Turkey; and, – Play a positive and guiding role with a view to implementing and strengthening the EU’s and the Council of Europe’s shared commitments to democracy and human rights.

As international civil society actors, we are ready to contribute our expertise to constructive efforts by the EU and its Member States to support persecuted journalists and writers in Turkey and to improve the situation for freedom of expression in the country.